Hello and welcome back to the LWJGL Tutorial Series. In the previous tutorial, we have learnt how to create a white triangle on the screen. I know it was quite boring, so in this tutorial, we are going to color it. We will be creating a triangle which is colored with three different colors, one for each vertex.

That is how we rendered our triangle onto the screen. The coloring process is also the same. We will create one more VBO to store the color data and point it to the next location in the shader. The difference, lies in the number of components and how we handle them in the shaders.

Then we create the VBO for the colors and point it towards the second location in the shader (The first location is used for vertices). From there, all the magic happens in the shaders.

Our work in Java code is done, assuming that you have also wrote the code to dispose the color VBO yourself. We now have to modify our shaders. Previously, our vertex and fragment shaders have no direct relation, because we produced the color of the triangle directly in the fragment shader.

As I said previously, the color is a four dimensional floating point vector, which we are reading from the location \(1\). You can see that we declared an output variable called as vColor. We made it the output variable because it is the output of the vertex shader, and the input of the fragment shader. We simply assign the color to the output, thus passing the value to the fragment shader. 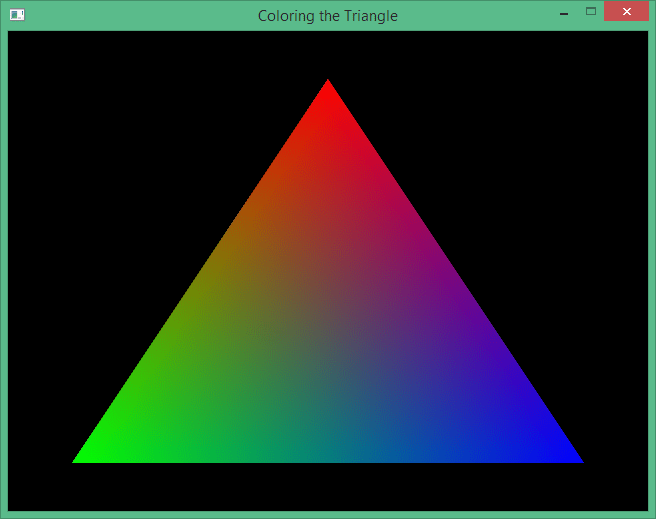 There we go, we have created a cool looking colored triangle in this tutorial. In the next tutorial, we will be learning how to use EBOs (Element Buffer Objects) and do indexed rendering.

All the source code for this tutorial is present on my GitHub repository here. Individual links to the files are given in the list below.